On Saturday, October 6th, the same day we launched Season 6 of The IG Builders Challenge, Cat Footwear held a Build for Better, event celebrating our partnership with them at the Rebuilding Exchange in Chicago. I was extremely lucky to have Cat Footwear fly myself and our build team to Chicago so we could participate in this event!

The IGBC and Cat Footwear partnered with Designs 4 Dignity, a non-profit organization that transforms charity environments through pro-bono design services and in-kind furniture donations, to make over the office of a local charity in need. 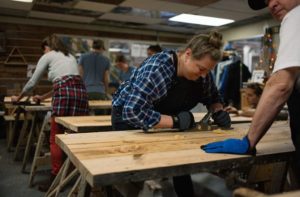 The Build for Better even was hosted by Cat Footwear at the Rebuilding Exchange, a non-profit that is celebrating its 10thanniversary of diverting building materials from landfills by repurposing and selling used goods.

It was an amazing day as we held three free workshop sessions throughout the day, and myself, Lana of @glacierbuilt, and Adam of @lazyguydiy taught these workshops. In the workshops, we helped to build a series of desks for the non-profit. Together, we reclaimed wood to chop, mill, sand, finish and ultimately assemble the new desks.

Along with building sessions, Build for Better was a family friendly event that included other free activities including, drop in workshops to build pencil holders to be donating to the charity.

There was also a “Water Walk” to support the global community through Cat Footwear and the Caterpillar Foundation’s campaign with charity: water. Every person who completed the water walk unlocked a donation of clean and safe drinking water for one person in need. We had over 400 walks completed and were able to raise $15,090 towards our goal for 2018!

At Cat Footwear, we believe in building a better future in our community. Thank you to everyone who came out to celebrate our community and customers who champion that same innovative spirit!